This FAQ includes answers to some of our common troubleshooting questions. More information about these (and other) features can be found in in our Knowledge Base.

I've saved a video file, but am unable to play it.

.AVI files have a maximum size of 2GB. When using Capture OEM and saving a video in uncompressed format, the 2GB maximum can be exceeded very quickly. To check the file size of your clip, right click on the saved video and select Properties. If the size is larger than 2GB, you will be unable to play the video and may see a "This file isn’t playable." error message.

To reduce the file size of the clip, either reduce the ROI, reduce the number of frames, or select H.264 Video Encoding in Capture OEM.

I see an "UnsupportedPixelFormat" error when I try to capture a video.

When using Pixelink Capture to record a video, Pixel format must be set to MONO8 for mono cameras, and YUV422 for colour cameras. Using a different Pixel Format will return an Unsupported Pixel Format error. Pixel Format can be changed on the Controls tab.

Please note: As YUV422 and MONO8 pixel formats are not available on polar cameras, video recording is not currently supported in Pixelink Capture for polar cameras.  To record a video with a polar camera, select the option to record an Uncompressed video from the Video Capture Tab of Capture OEM.

As polar cameras (like the PL-D755MU-POL) support polar pixel formats, and not MONO8 / YUV422, it is not possible to record a video from a polar camera in Pixelink Capture. However, video can be recorded from the Video Capture tab of Capture OEM, by selecting the "Uncompressed" option under Video Encoding.

My recorded video is too fast/slow when it plays back (appears "sped up" or "slowed down").

To play back the video at the frame rate of the camera, please ensure that the "Match Camera" box is checked, as shown in the following screenshots:

I've recorded multiple videos/captured multiple images, but I only see one saved file.

Image and video file names are not incremented by default. Capturing a second video or image will overwrite the first saved file, unless the file name is changed. To automatically increment the file name, please check the "Increment File Name After Capture" box on the video or image capture tabs.

After recording a video, I see a message saying additional frames were required. 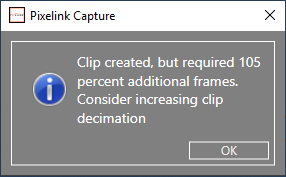 This window indicates that the video capture mechanism was unable to keep up with the current camera stream, and therefore additional frames were required to record a video with your desired number of frames.

One way to handle this is to increase clip decimation. This can be done by increasing the Decimation Factor on the Video tab of Pixelink Capture, or the Video Capture tab of Capture OEM. Other tips can be found towards the bottom of the PxLGetEncodedClip article, under the Comments, Restrictions and Limitations section.

How do I determine the length of a video?

The length of a video can be estimated using the following equation: Number of Frames / Frame Rate (FPS) = Length of video (in seconds)

How do I record a longer video?

Pixelink Capture limits the Number of Frames to 1000, which may limit the length of video you can record. To record a longer video using Pixelink Capture, reduce the frame rate of the camera (and playback frame rate).

You can also use Capture OEM to record a longer video, as Capture OEM does not limit the number of frames. Uncompressed video files may be limited to 2-4GB, however (a limitation of the AVI file format). so enable H.264 Video Encoding in Capture OEM when recording a longer video.

Check that trigger is not enabled on the Triggers/GPO tab of Pixelink Capture, or the External Controls tab of Capture OEM. When trigger is enabled, the preview window will not update until a trigger is received.

When using the Time Lapse Capture Feature, I am not seeing as many saved images as I should.

Time lapse capture captures frames and saves the frames to disc. A number of factors which impact the rate at which images can be captured and saved, including:

The following steps may help increase the number of saved frames:

Finally, increase the "capture every" interval until the correct number of frames are captured and no frames are lost.

Please note: For application development, a .NET RapidImageCaptureApplication code sample is included in the Wpf folder of our latest Windows SDK, and shows an example of capturing and saving images at a higher frame rate.

I am unable to use my camera in uScope / the "Image Capture" option is greyed out.

Please ensure your USB dongle is connected to your computer, and verify that the correct uScope version is installed as per the How can I check my uScope version and find uScope documentation? article. Guardant Stealth dongles will support uScope v3.6 and below, and Guardant Steal dongles will support v20 and above as in the uScope System Requirements article. uScope dongles will also only work for the software level purchased, so a uScope Essentials dongle will only work with uScope Essentials, and a uScope Professional dongle will only work with uScope Professional.

The latest versions of uScope can be downloaded from this link: https://pixelink.com/products/software/microscopy-software/

To download uScope v3.6, please Contact Support with the name and serial number of your USB dongle.

When this occurs, try running the uScope installer again. Do not delete any installed files before doing so.

The GrdAPI64.dll file contains the drivers for Guardant USB dongles, which are used with uScope, If you receive this error, the drivers can be downloaded from the Guardant website.

I see a "Please Attach a PixeLINK Camera" error message when using my camera as a TWAIN device.

The following steps can help resolve the above error message:

I've followed the procedure to install the pixelinkimaq adaptor, but the camera is not detected in Matlab.

First, verify that the camera is detected and can stream video in Pixelink Capture (or Capture OEM).