To capture and save your first video using Pixelink Capture, follow the steps below:

1. Connect your camera to the computer, and open Pixelink Capture.

2. You can change camera settings like exposure time and frame rate on the Controls tab.

Note: Pixel formats MONO8 and YUV422 are supported for video capture. Pixel format can be changed from the Format drop down, on the Controls tab of Pixelink Capture.

3. Go to the Video tab of Pixelink Capture, and choose the name and location for your saved video file.

4. Ensure the "Match Camera" box is checked, as shown in the following image, so that the playback frame rate of the video matches the frame rate at which the video was recorded. Changing this value may cause videos to appear "sped up" or "slowed down".

Please note, version 10.4 (and below) of Pixelink Capture limited the Number of Frames to 1000. To record more than 1000 frames, please install the latest version of Pixelink Capture, available for download from our website: https://pixelink.com/products/software/pixelink-capture-software/

6. Click the camcorder below the preview window, as seen in the following image, to begin recording a video.

This error occurs when trying to capture an ROI greater than 9 MP. Reduce the Region of Interest Size using the drop down menu located above the preview window. 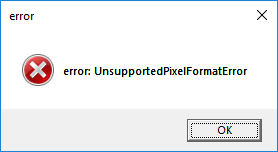 Change Pixel Format to YUV422 for colour cameras, or MONO8 for mono cameras, on the Controls tab.

Please note: As YUV422 and MONO8 pixel formats are not available on polar cameras, video recording is not currently supported in Pixelink Capture for polar cameras.To record a video with a polar camera, select the option to record an Uncompressed video from the Video Capture Tab of Capture OEM.