The "Video Tab" allows the user to capture and display "Video Clips" or group of frames (partial or full), and save the formatted clip to be previewed on a later date.

How to Manipulate the Controls 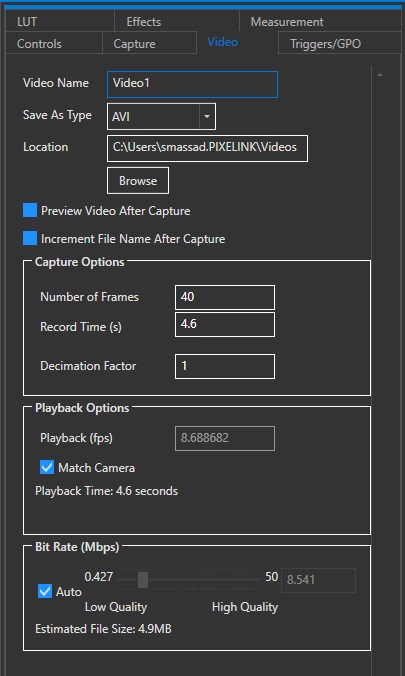 Use this icon on the Preview Panel to Capture a Video Clip. Video Capture settings can be changed on the Video tab.

This box allows you to set a file name a name for the captured video.

Choose the file format for the captured video. Pixelink Capture can output the video file in AVI and MP4 formats.

Select the directory path for saving the video clip, either by using the browse button or by typing the path into the location box.

Open and view the saved video file once the capture has completed.

Check the box "Increment file name after capture" to add a number to the end of the captured video file name so that already existing captured videos are not overwritten. For example, if the entered video name is "Movie" the fist time an image is captured it will be saved as "Movie1". Following captured images will be named "Movie2", "Movie3", "Movie4", etc.

Number of Frames
Use to set the total number of frames to be captured in the video clip. This will determine the length of the clip. Note that changing the Number of Frames will also change the Record Time.

Decimation Factor
Reduces the number of frames per second by the specified factor. The default is 1, for no decimation.

Please note that even though Playback allows to match as high frame rate as a camera can provide, viewing playback frame rate larger than 30 - 60 fps is impractical as the human eye cannot see motion details beyond there rates. 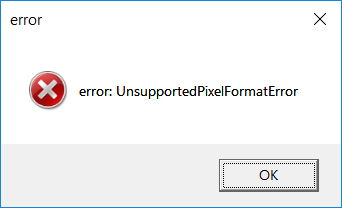 To record video, please ensure Pixel Format is set to YUV422 for colour cameras, or MONO8 for mono cameras. Using other Pixel Formats will generate the above error. Pixel Format can be changed from the drop down menu on the Controls Tab.

Please note: As YUV422 and MONO8 pixel formats are not available on polar cameras, video recording is not currently supported in Pixelink Capture for polar cameras.  To record a video with a polar camera, select the option to record an Uncompressed video from the Video Capture Tab of Capture OEM.

As polar cameras (like the PL-D755MU-POL) support polar pixel formats, and not MONO8 / YUV422, it is not possible to record a video from a polar camera in Pixelink Capture. However, video can be recorded from the Video Capture tab of Capture OEM, by selecting the "Uncompressed" option under Video Encoding. Pixelink Capture can be used to capture images from polar cameras.