This article contains tips for handling the most common troubleshooting issues that may occur with PL-A and PL-B FireWire cameras.

Note: All PL-A series cameras and PL-B FireWire cameras summarized in the table below are obsolete Pixelink products and hence our support for these camera models is limited.

I've upgraded my computer (eg to a computer with Windows 10) and my camera no longer works, but it worked on my old system.

If you've upgraded to a new computer, the new computer may be using a different 1394A (FireWire) card.

We've found that some 1394A cards work better with our cameras than others. In general, we recommend using cards with a TI chipset, as we've found these perform best in our testing. You can find the chipset of your 1394A card from Device Manager, under the IEEE 1394 host controllers section:

The camera is not detected on the host system

Connection issues are often related to the Firewire port or cable. Especially if the cable is an older cable, or one that came with the camera originally, it may be time to replace the cable with a new one.

Try testing your camera with a new Firewire cable, and/or connecting it to a new port on both the camera, and system.

Where can I find software for my PL-A camera?

The installer will install two camera applications: Pixelink Capture, and Capture OEM. Capture OEM is our older camera control application, and it often performs better with PL-A cameras. You can find Capture OEM from the Windows start menu, or from it's default location after installation: C:\Program Files (x86)\PixeLINK\Capture OEM\PxLDevApp.exe

I am using the PL-A FireWire but not the PL-A64x, PL-A65x, or PL-A66x camera and Pixelink Capture cannot be opened or cannot detect the camera.

Install the latest Pixelink Capture and try to use Capture OEM instead. Please review the Installing Pixelink Capture article. Capture OEM is our older camera control application, and it often performs better with PL-A cameras. You can find Capture OEM from the Windows start menu, or from it's default location after installation: C:\Program Files(x86)\PixeLINK\Capture OEM\PxLDevApp.exe

Is the PL-A software compatible with Windows 10?

If you were using uScope, your licence dongle may or may not support Windows 10. To determine this, check the name of the dongle, which can be found on one side of the green USB key.

Guardant Sign dongles support the latest version of uScope, which is compatible with Windows 10. Download the version supported by your licence dongle here: Microscopy Software.

Guardant Stealth II dongles support an earlier version of uScope, which is not compatible with Windows 10. To upgrade your uScope dongle, please contact sales.pixelink@ametek.com

If you're not sure which version your licence supports, please email pixelink.support@ametek.com, and include the name and serial number of your USB key.

Yes! From the uScope toolbar, use the Acquire -> Select TWAIN device… command to select or change the current TWAIN-compliant device.

Or alternatively, select PixeLINK ver3 from the Capture device drop down menu, on the Image Capture window. 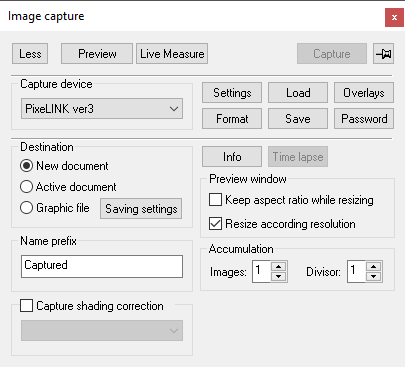 If you've upgraded to a new PC, double check that your uScope dongle is compatible with the operating system on your new computer. Guardant Stealth II dongles are compatible with uScope version 3.6, which can be installed on Windows 7 (and earlier versions of Windows). For more information, see uScope System Requirements

Note: If these tips do not work for you, we recommend that you contact Pixelink Sales (sales@pixelink.com) to learn about our newer camera models available for upgrade.