When working with PL-X 10 GigE cameras, there are some additional considerations to help ensure optimal performance from the camera. These "tips, tricks and got'chas" regarding NIC selection, settings, cables, and computer configuration are listed below.

Be sure to plug the card into a PCIe slot which is capable of using all (4 or 8 or more) PCIe channels.

The camera supports oversized, or ‘Jumbo’ Ethernet packets, and the use of Jumbo packets is necessary to use full network bandwidth.  For most NICs, Jumbo packets are turned off by default. 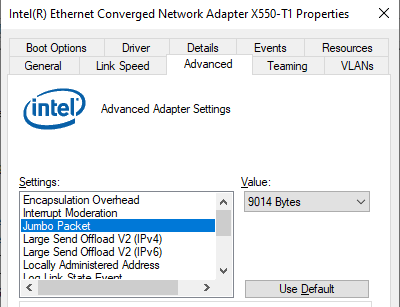 Also, if configurable, the amount of receive buffer allocated to the NIC should be maximized.  Note: This setting may not be configurable on all NICs.

Finally, be sure the NIC is operating in full duplex, 10 Gigabit Ethernet mode. This should be done via the default auto-negotiation. 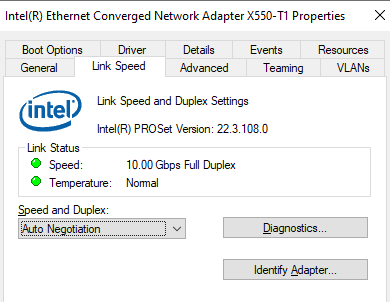 The camera must be on the same IP network as the NIC (as defined by the IP address and subnet mask). The Pixelink cameras support both DHCP (requires a DHCP server) and LLA to automatically choose IP addresses.  However, if LLA is being used, it’s important to recognise that it can take upwards of 20 seconds for both the NIC and the camera, to choose appropriate IP addresses.  Furthermore, the user has the option of assigning the camera a persistent (non-volatile) IP address if they prefer to manage the IP information themselves.

The first time any application (built using the Pixelink API) is run, Windows will detect that it is attempting to communicate to a device through the firewall, and will display a "Windows Security Alert" prompt.

When prompted, it’s important to check to allow communication over all three network types, as in the screenshot below.  If you do not do this from the pop up, it can be added later via the Windows Firewall program. 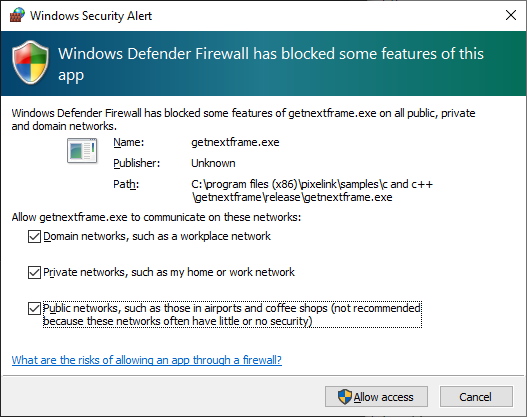 If the application is not permitted through the Windows Firewall, the application will still be able to communicate with the camera, but only at lower performance levels; it will not be permitted to use the ‘Jumbo packets’ referenced above.

Streaming at or near the full 10 Gb/s places some very stringent real-time demands on the system.  Although Windows was not designed to be a real-time system one can improve real-time (like) characteristics by doing things like:

If the camera is connected via one or more switches, ensure that these switches have sufficient buffering to operate at full wire speed, and that they too are configured to support Jumbo packets.