An "Effect" transforms the image's pixel data just prior to display or capture. Typically this function is intended to process an incoming image. The effects tab allow the user to select a pre-defined callback on real-time or captured images. 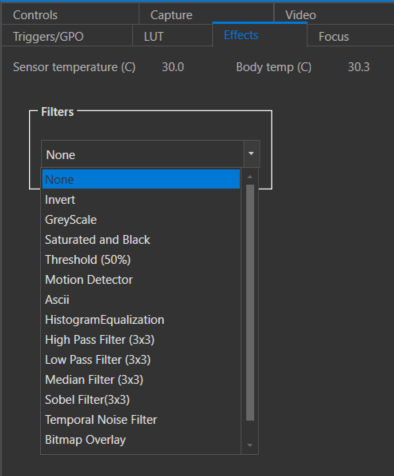 Turns fully saturated pixels, into RED pixels and black pixels into BLUE.  Makes it easy to identify ‘hot spots’ on an image.

The pixel dN values, are mapped to the ASCII character set.

Improves the contrast of "muddy" images by; detecting the minimum and maximum pixel values in the input range calculating a linear conversion that maps the minimum intensity value to full black and the maximum intensity value to full white creating an enhanced image by converting all of the pixels of the input image accordingly. This has the effect of stretching out the pixel values to the widest possible range, thereby increasing contrast and depth in the image.

Detects edges based on gradients (differences) in local pixel values.

Attempts to filter out noisy pixels over time.  That is, individual pixels that seem to fluctuate from one streamed image to the next, while it’s neighbors do not.

Adds a bitmap, such as a company logo or a time stamp, on the image.  Enter the name and location of the bitmap in the "File Name Box", or use the "Browse" button to locate the file.

Adds a crosshair overtop of the display, centered on the full ROI of the camera. The crosshair is grey by default but can be made white or black to improve visibility.

Adds a crosshair overtop of the display, centered on the current ROI of the camera. The crosshair is grey by default but can be made white or black to improve visibility.