How to Manipulate the Controls 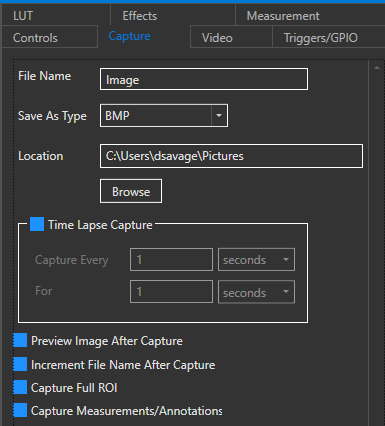 Use this icon on the Preview Panel to Capture an Image at any time. Image capture settings can be changed on the Capture Tab.

This box allows you to set a file name, a name for the captured image.

Choose the file format for the captured image. Pixelink Capture can output the image file in BMP, JPEG, TIFF, PSD and RAW formats.

Select a directory path for the saved image. The path can be entered into the text box, or selected using "Browse" option.

Check the Time Lapse Capture box to capture a series of images over a period of time. The fields will be highlighted when the box is checked. Click and enter a value for "Capture Every" to capture an image for every period specified of the duration/time.

Check the box "Preview Image After Capture" to automatically display the image immediately after the capture. The image will be displayed in a default windows image viewer.

Check the box to have any active measurements overlayed on top of captured images. Please note: Only annotations, measurements, and the scale bar currently visible on the preview window will be captured.