The GEN<i>CAM standard provides an image sub-windowing mechanism as part of it’s required features identified in the Standard Feature Naming Convention (SFNC) document.  All Pixelink Gigabit Ethernet cameras support this sub-windowing as defined in this specification.  What’s more, Pixelink provides additional (proprietary) sub-window control mechanisms, which provide the user more flexibility in application and system design.  This technical note will describe both the standard based and proprietary mechanisms, how they interrelate, and offers guidance on when to use one over the other.

The GEN<i>CAM standard sub-windowing scheme allows the user to define an ‘Area Of Interest (AOI)’ within the entire field of view of the sensor.  It uses the following SNFC features to define this AOI:

•    SensorWidth – The effective width of the sensor, in pixels.

•    SensorHeight – The effective height of the sensor, in pixels.

•    Width – The actual image width expelled by the camera, in pixels (AOI width).

•    Height – The actual image height expelled by the camera, in pixels (AOI height).

•    OffsetX – The horizontal offset from the AOI origin to the AOI, in pixels.

•    OffsetY – The vertical offset from the AOI origin to the AOI, in pixels.

The relationship between these features is represented by the following diagram. 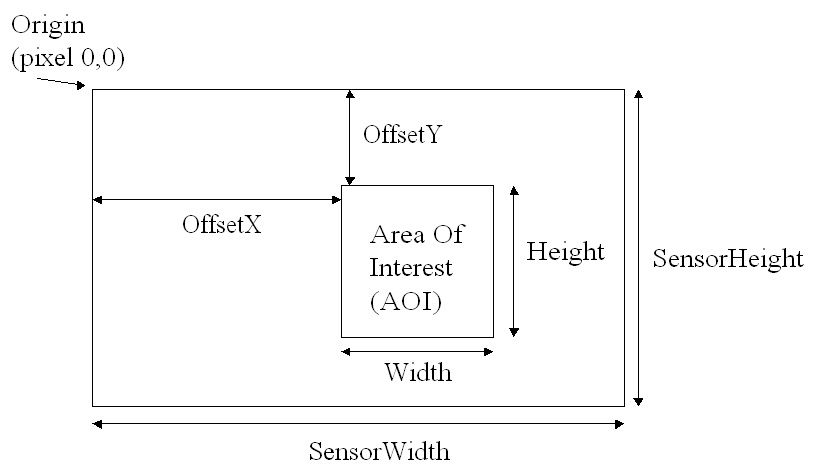 Pixelink defines two feature ‘classes’ that affect sub-windowing; Region Of Interest (ROI) and Pixel Addressing.  Region of Interest is a very similar construct to the standard based Area of Interest; whereby it is also a technique that can be used to reduce the image to only a subset of the entire field of view.  The most distinguishing characteristic between the two, however, is that ROI affects images expelled from the imaging sensor, whereas AOI affects images expelled from the camera.  This is explained in more detail in the ‘AOI vs ROI’ section of this paper.

The ROI can be created using the following PixeLINK specific features:

•    MaxSensorWidth – The true width of the sensor, in pixels.

•    MaxSensorHeight – The true height of the sensor, in pixels.

•    RoiWidth – The actual image width expelled by the imaging sensor, in pixels.

•    RoiHeight – The actual image height expelled by the imaging sensor, in pixels.

•    RoiOffsetX – The horizontal offset from the ROI origin to the ROI, in pixels.

•    RoiOffsetY – The vertical offset from the ROI origin to the ROI, in pixels.

The Pixel Addressing features controls the number of pixels read from the ROI, in essence, compressing an image (with data loss).  It is controlled by two features:

•    PixelAddressingMode – Defines the compression strategy used.  ‘Decimation’ mode for instance, will compress the image by ignoring specified pixels within the ROI.  See the PixeLINK documentation for a detail explanation on the various Pixel Addressing Modes available for different camera models.

Given the functional overlap between the AOI and ROI features, most applications will use one strategy or the other – rarely would an application require both.  Both sub-windowing techniques will result in the same amount of image data being expelled from the camera.

The AOI features have the advantage in that they are ‘standards’ based.  That means that if an application were being developed based on some sample code, or a pre-existing application – it is quite likely that this code will contain support for the AOI features.  Conversely, the ROI adjustment features have the advantage of providing a sub-windowing control as it relates to the sensor.  That is, once an ROI has been established, the camera only needs to scan that portion of the sensor that is related to the ROI.  This has some performance advantages, as it will allow for more frequent image scans, thus permitting the camera to operate at higher frame rates.

The relationship between the AOI and ROI features is characterised in the following diagram: 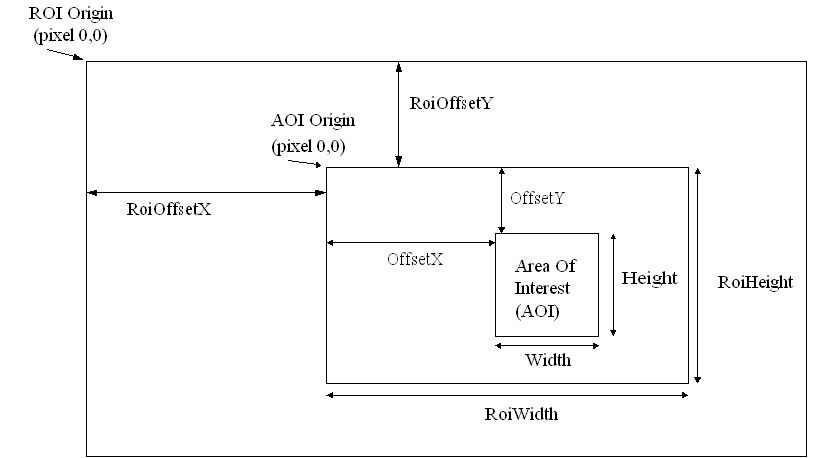