Camera application-dependent factors such as Fixed-Pattern Noise (FPN), Photo Response Non-Uniformity (PRNU), Illumination and Optical non-uniformities will have a negative impact on the quality of images captured. The effects of these parameters can be minimized and often eliminated by performing a proper Flat-Field Calibration (FFC).

FFC data is stored in non-volatile memory inside the camera. All FFC-enabled Pixelink cameras are shipped with factory calibrated FFC, done at a gain of 0dB and at an integration time of 40ms – 100ms depending on the camera model, without a lens under very uniform light using an integrating sphere. Since the camera will be operated in your application environment, which will have its own unique set of operating conditions (lighting, optics, gain, integration time), it is imperative that you perform the Flat-Field Calibration using your operating environment.

Regardless of the type of light source used it is extremely difficult, if not impossible, to have a perfectly even illumination pattern on the object being imaged.

The above images were taken against a flat white board using a single light source positioned to the left of the camera. Notice the effect that the light source has before FFC was performed. After FFC has been completed, the same white board appears evenly illuminated using the same camera settings, camera lens and light source.

Fixed Pattern Noise (FPN) is a fixed pixel-to-pixel offset and is due to a combination of variations in image pixel geometry, substrate material and dark current. It is fixed with respect to illumination; however, it is temperature, integration time and gain dependent. FPN is measured under dark conditions at a given integration time, temperature and gain.

Dark current is linear with respect to integration time and doubles with every 6-8 degree Celcius increase in temperature. As such, a camera which has been factory calibrated and is then used in a high-heat environment will exhibit much more dark current than when it was originally calibrated. Performing FFC in the operating environment will compensate for this. 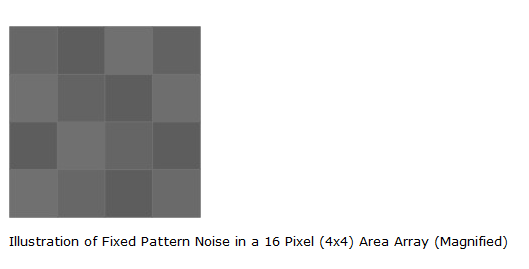 Theoretically, when a fixed, uniform light falls on the pixels of a CCD/CMOS sensor, each cell should output the exact same voltage. However, due to a variety of factors including slight variations in pixel geometry and substrate material, this is not the case. When a uniform light is transmitted onto the pixels of a CCD or CMOS camera, the pixels output slightly different voltages. This difference in response to a uniform light source is referred to as Photo Response Non-Uniformity or PRNU. Since PRNU is caused by the physical properties of a sensor, it is nearly impossible to eliminate and is therefore usually considered to be a normal characteristic of the sensor array used in any CCD or CMOS camera. 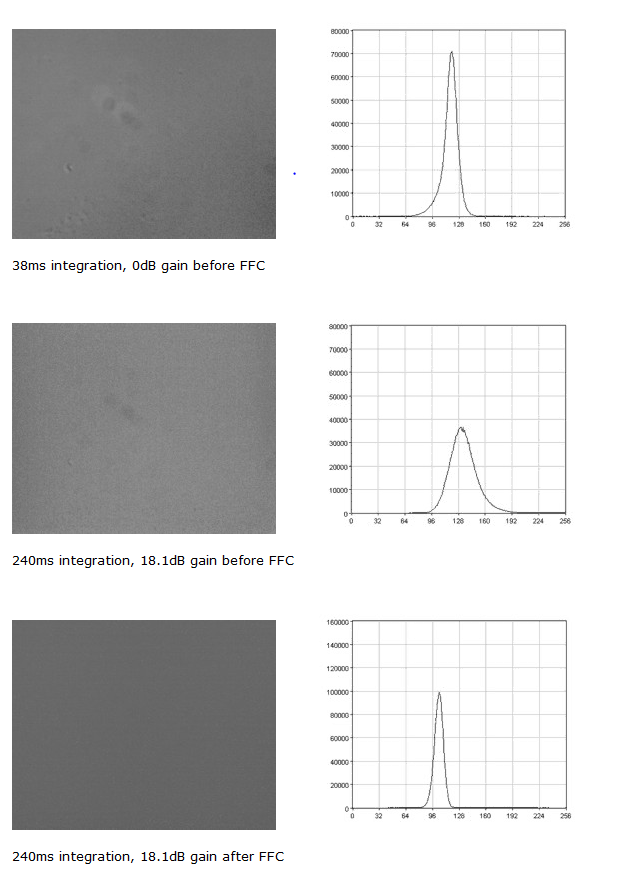 Several factors must be considered when determining the quality of a lens including sharpness, contrast, color correction, relative illumination, spectral transmission and distortion. These factors result in lenses producing slight variations between the object and the image.

Lens intensity varies from the center to the edge of the image with the center being brighter than the edges. This can often affect the suitability of a lens for your application and should be examined prior to integrating a lens into your application. This non-uniformity is caused by two factors: the first is the natural decrease in illumination from the center of the image circle to the edge of the lens and is known as the cosine fourth effect. The second, known as mechanical vignetting, is often present and results in some rays being blocked by mechanical parts located within the lens. Vignetting of this type can often be greatly reduced by using a smaller aperture.

Using the Histogram to Implement Even Illumination 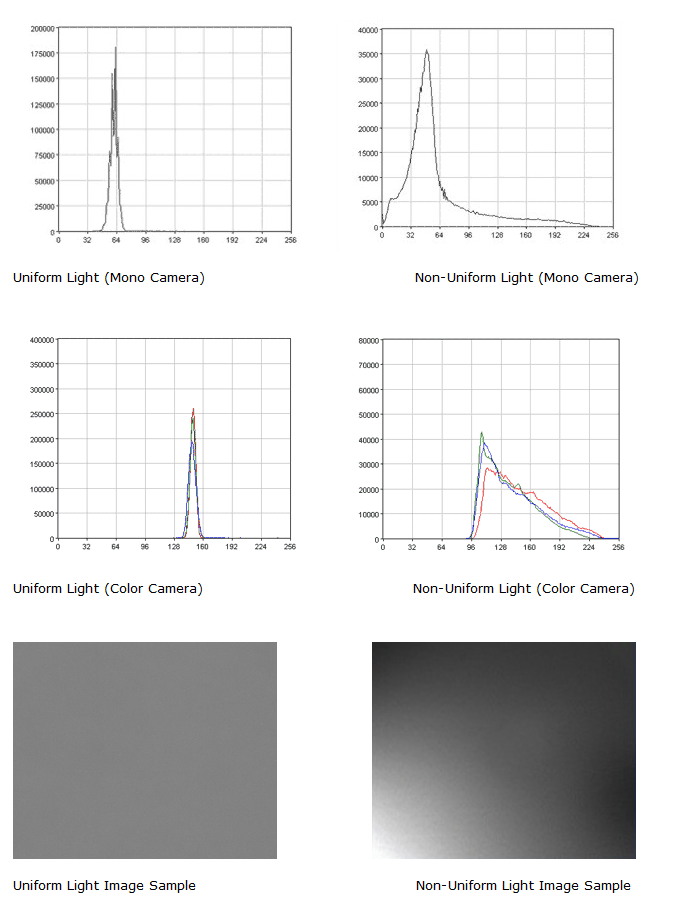 Ensure that you have a flat white or grey card that covers in the entire Field of View (FOV) of the camera before proceeding with the FFC Wizard. If the lens is focused perfectly, the camera will be able to image the surface irregularities (texture) of the card and the FFC will compensate or correct for the surface texture.  Therefore it is important to defocus the lens when capturing the FFC bright field image (see step #7 below).

For optimum image quality, the FFC wizard supplied by Pixelink should be used to perform Flat Field Calibration for each camera in its specific application environment. Changes in lighting, optics or camera settings after the FFC has been performed may result in the camera not delivering optimum image quality. If any of these variables are altered, FFC should be performed again. 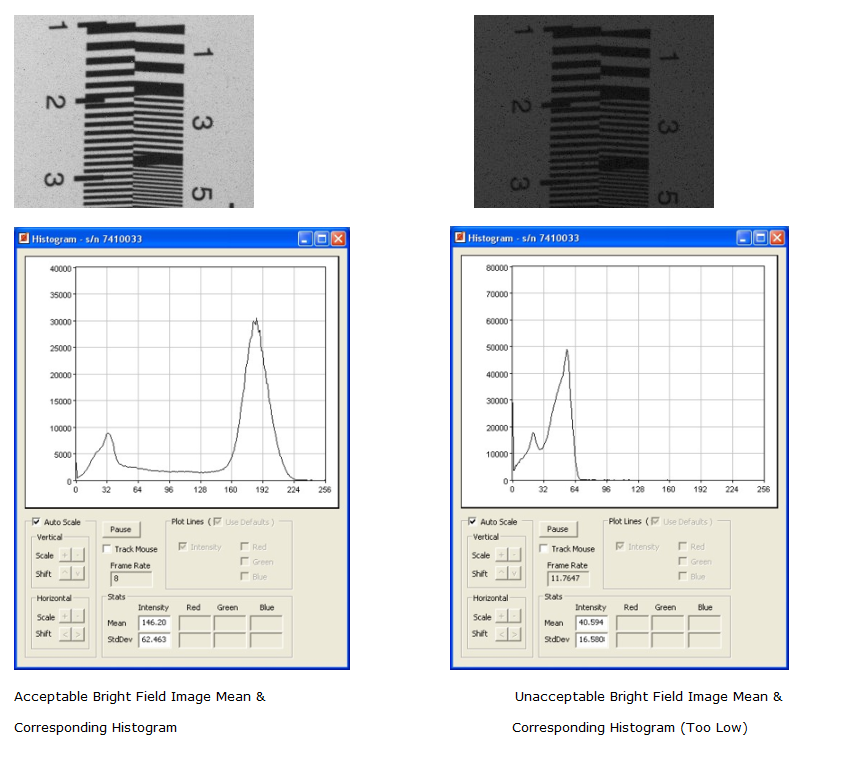 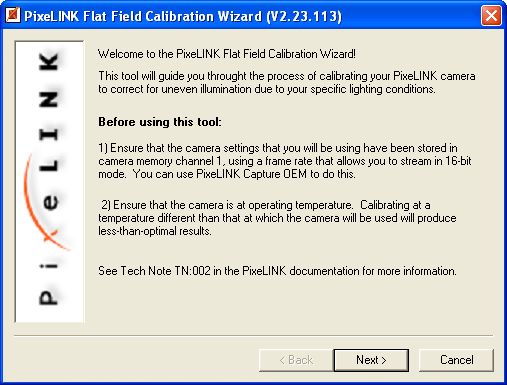 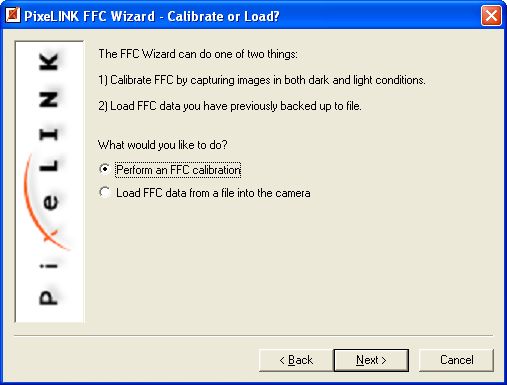 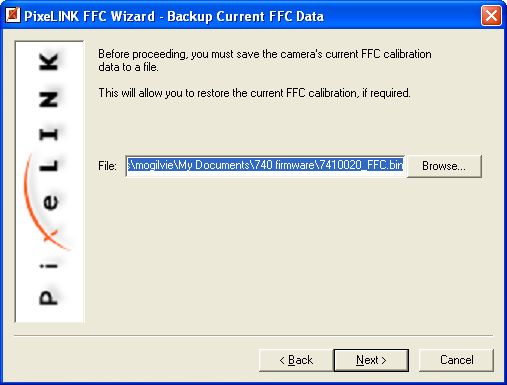 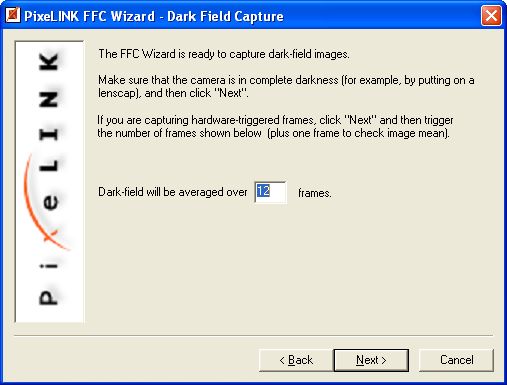 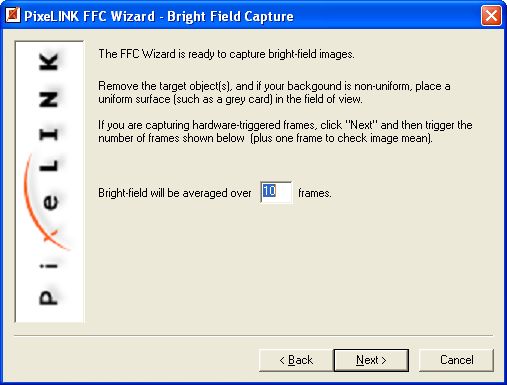 The image mean can be altered either by adjusting the lens iris so that it is more open or closed (depending on whether Image Mean is below 55% or above 80%) or by adjusting the camera settings. If you cannot adjust your iris to correct this, you must Abort the FFC Wizard and then adjust your camera settings using Pixelink Capture OEM so that Image Mean falls between 55% & 80% saturation. You can determine when the Image Mean is acceptable by using the Histogram as illustrated at the beginning of the Performing FFC section. 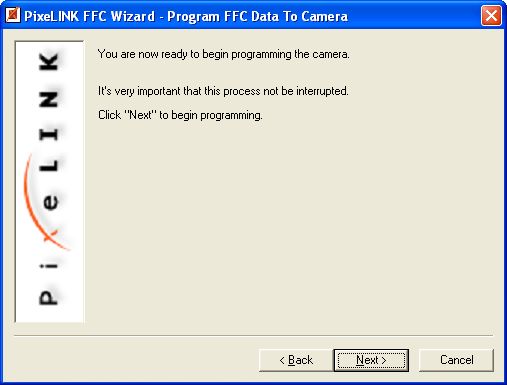 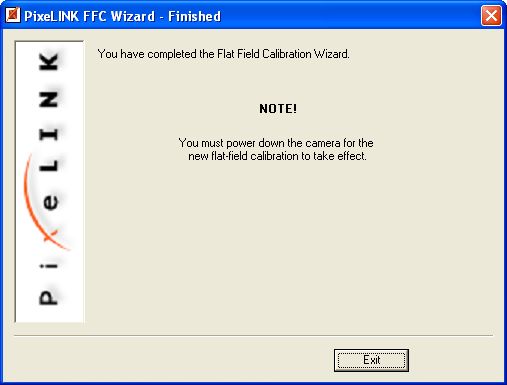