When the Pixelink Capture TWAIN interface is activated, it will determine if more than one Pixelink camera is attached to the computer. If so, it will ask you to select the camera to control. If there is only one camera connected, the TWAIN interface will automatically select it.

If using software that asks you to select a source, select Pixelink Capture TWAIN from the "Select Source" menu:

After initialization, the TWAIN GUI and preview window will appear. The preview window will show a live image. The GUI will reflect the last settings used by that camera or the factory defaults. Only controls supported by the camera will be enabled. 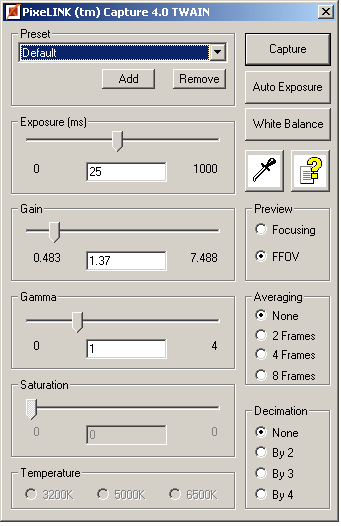 The Preview Window will show either the Full Field Of View (FFOV) or a zoomed in view for focusing.  You can select between the two.

Choosing the radio buttons Focusing or FFOV in the Preview control group.

The inpidual controls for Exposure, Gain, Gamma, Saturation and Temperature can be adjusted to achieve good image quality and color rendition.  (Temperature relates to the Color Temperature of the illumination source used in degrees Kelvin.)  In addition, Auto Exposure and White Balance buttons, located under the Capture button, can be used to quickly determine the best exposure and white balance.  The eye-dropper button can also be used to perform white balance by indicating a region that should be made white.  Click this button and then click the appropriate region in the preview window.

Captured images can be averaged over a number of frames and/or decimated (made smaller).  The decimation values refer to the dimensions of the image.  For example, decimation by 3 will result in a captured image one ninth the size of the sensor resolution.

To close the TWAIN interface, click the Close button

at the top-right of the GUI window.

At the top of the GUI is a Preset pull-down.  Presets can be saved to store settings that are used frequently.

To save a Preset, setup the camera settings, preview and capture options as desired and click on the Add button.  A dialog will appear asking for the name of the preset. Enter a relevant name, such as "My 10x Objective" and click OK.

To apply a preset, pull-down the Preset control and select a saved preset from the list.  A factory preset called "Default" will restore the camera and GUI default settings.

If the GUI settings are changed, the Preset pull-down will become blank.  To reapply the preset, select it from the list.

To delete a preset, select the preset and click remove.  The factory default preset cannot be removed.

Note: Presets are camera specific.  Saved presets will only appear when using the same type of camera.

If you see a "Please attach a Pixelink camera" message, please try the following:

If using third party software, you may also find more information in the manual or knowledge base for that software.